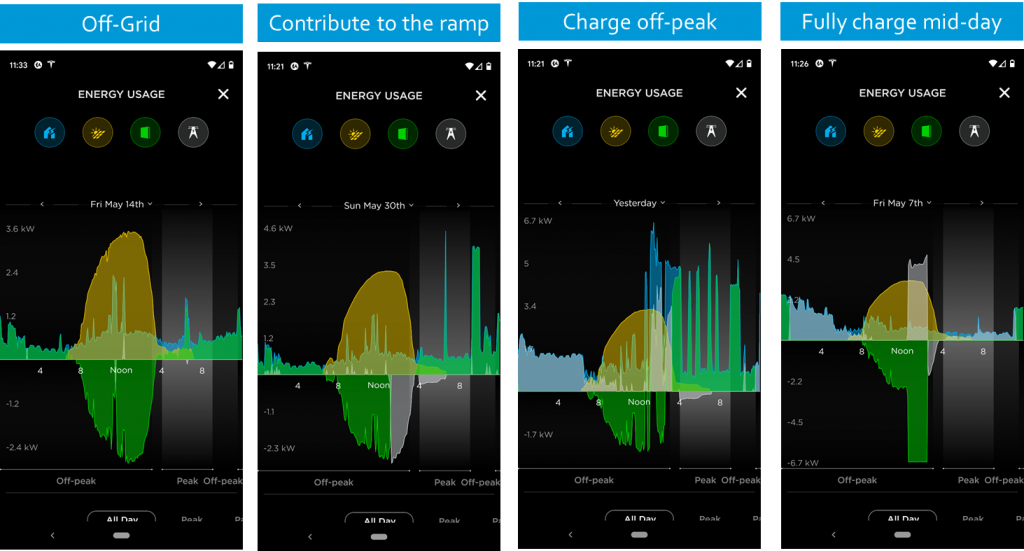 The first plot is a very good outcome. It shows no grid usage. The home (blue) is exclusively being powered by battery storage (green) and solar (orange).  This pattern happens fairly often in the spring when household energy consumption is low and solar production is high. It also means no grid exports, even if the grid needs additional resources. The second case – contributing to the ramp – is disturbingly common. The battery starts charging as soon as the sun is up and is fully charged around mid-day, at which point, all of the solar comes online all at once. From a grid standpoint, it’s contributing to the ramps and is not helping absorb surplus solar. The last two scenarios are less common. The third plot shows some use during off-peak hours (I was charging a electric car), my intentional draw from the grid immediately before the 4-9 pm period, and use of the battery throughout that peak window (with a small amount of exports). It was also a very hot day. You see my AC unit cycling on and off. The last plot shows the full capability of the battery, close to 7 kW, which is rarely seen. The battery went into storm mode and drew power from the grid rather than charge only using the rooftop solar. When operated in default mode, the battery will almost never charge or discharge at its full capability. It means that behind-the-meter batteries are an under-utilized, untapped resource during periods from the grid needs resources the most and during period with excess generation on the grid.

If left to operate on their own, the batteries typically charge as soon as the sun comes up (the wrong time from a grid perspective), often don’t absorb surplus generation, and rarely, if ever, export to the grid when resources are needed most. By design, they operate with the customer in mind, which is an excellent objective. However, it is possible to lower customer bills, provide backup power, and also improve operations for the grid. As saying goes, “we can walk and chew gum at the same time.”

Why does this matter? Behind the meter battery storage is a growing, untapped resource, and the need for flexible, predictable resources is growing.  The below plot shows the growth in residential behind-the-meter battery storage in California. There are currently about 400 MW, but the magnitude of growing quickly. Roughly 8-10% of new solar installations are also install battery storage at the same time. And the share of solar sites electing battery storage is growing. What can be done to tap into this under-utilized resource? Clearly, it is not enough to have the batteries installed. It is necessary to operate them at the right times and to provide customers incentives to do so.

DSA is involved in several efforts to better use battery storage, including:

The last few months have been unusual. COVID-19 has led to changes in our commutes, business operations, and home use patterns. It’s also changed how, when, and how much electricity we use.  As long as we have social-distancing, efforts to re-open, and concerns about a second wave, forecasting electric demand will be more difficult. There are several fundamental questions:

We were curious ourselves and decided to answer those questions. In the process, we built a live dashboard to track the effect of COVID on electric demand across the U.S. <link>. The plot below shows how electric demand changed over time compared to pre-COVID levels. The dots are individual days; the line shows the 7-day trend. In the U.S., electricity peak demand and sales dropped by roughly 7.5%. The drop is most noticeable in mid-March when the first stay-home orders started going into effect. Starting in May and June (depending on location), electricity use has begun to inch back up. 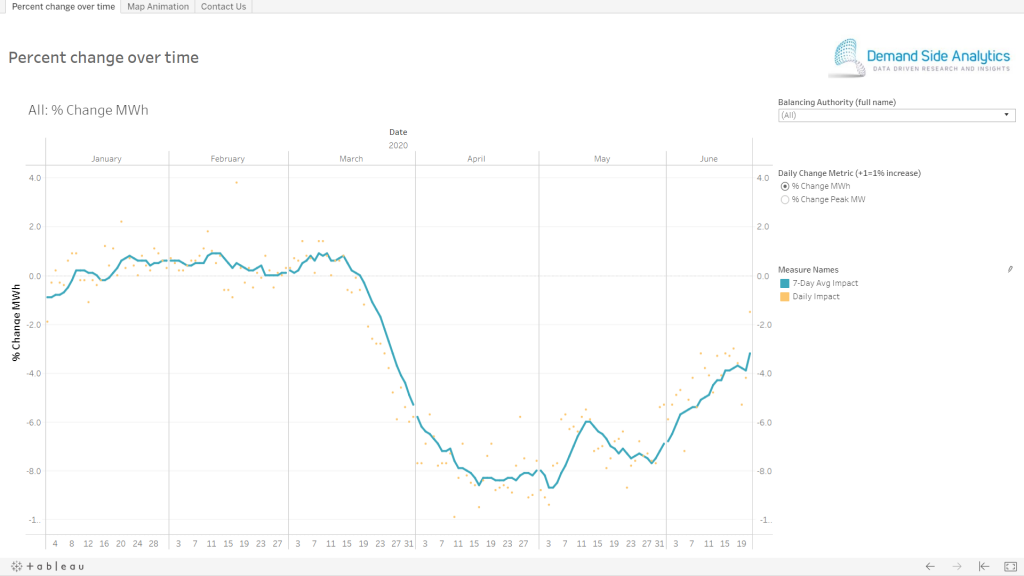 Electric demand dropped off throughout most of the U.S.  The plot below shows snapshots of the change in electrical demand for the first Monday of March, April, May, and June. For some areas, such as Nevada and Texas, efforts to re-open the economy (and casinos) are clearly evident in the energy patterns. 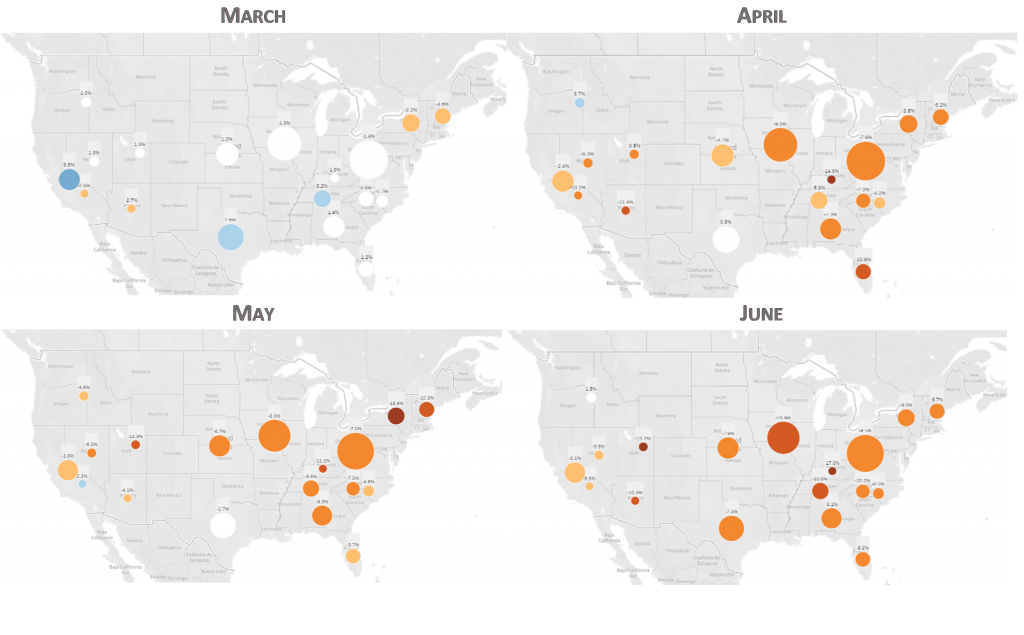 So, where do we go from here? Our dashboard will be updated daily to track how electricity demand and use changes as we attempt to return to normal. The dashboard provides the ability to view specific balancing authorities or the U.S. as a whole. Monitoring the effect of COVID on electric demand is the first step. COVID-19 has made forecasting energy sales and peak demand more difficult, both in the near and long term. The next step is developing short and long term forecasts that adjust as social distancing and economic re-openings evolve. We have some ideas about how to do that well.

Earlier this week, the California Department of Motor Vehicles posted a granular data set with vehicle registration details by zip code, vehicle type (gas, electric, plug-in-electric, hybrid, etc), model year, and make (e.g., Tesla, Toyota, etc.). The data runs through October, 2018. Because it includes all vehicles, it provides insight into the penetration of electrified vehicles overall and by model year. We decided to visualize it, make it interactive, and share it. Enjoy.

We’ll be visualizing vehicle penetration data from Massachusetts and New York relatively soon. If you know of other states that provide granular vehicle data, drop us a note and we’ll add them to our list.

Electric vehicles penetration and electrification has been a subject much debate and discussion recently. Like many other States, New York has been grappling with setting policy regarding electric vehicles.  Three key drivers for planning and policy decisions are the rate of adoption, the speed of turnover in vehicle stock, and whether adopters are concentrated in specific areas.

We have been working with a utility in New York to automate monitoring of electric vehicle adoption, develop customer specific adoption propensity scores, and estimate the impact of electric vehicles on the hourly loads (8760) of individual circuits, substations, and sub-transmission areas. In this blog, however, we discuss the vehicle adoption in New York as a whole using public available data sources.

New York is at the forefront of the open data movement. They publicly post vehicle registration data for each of 11.7 million vehicles in New York, including VIN numbers, zip codes, dates of registration and host of other factors (https://data.ny.gov/Transportation/Vehicle-Snowmobile-and-Boat-Registrations/w4pv-hbkt/data). Once we remove from the dataset boats, motorcycles, ATV’s, and 2018 models (since the data for that year is partial), we have roughly 9.4 million vehicles in New York. We supplemented  the New York vehicle registration with detailed information about the make, model, trim, engine type (gas/hybrid, etc.), model year and other characteristics that can be extracted from VIN numbers. This underlying data provides rich insights into electric vehicle adoption.

What Do We Know About Electric Vehicle and Green Car Penetration So Far?

The figure below shows green vehicle adoption by model year, as the percentage of the total registered vehicles in each model year.  The year by year penetration of electric vehicles and plug-in electric vehicles has been growing quickly, but remain small as share of total vehicles. The penetration of hybrids in New York appears to have already peaked between 2% and 3% of all vehicles. A key question is whether electric vehicles will drive up the overall share of green cars or if we will see a shift from hybrids to PHEV’s and all-electric vehicles. It is also instructive to understand the mix of vehicles, which is shown in second figure below. While hybrids were dominated by Toyota, the EV and PHEV market is far more open, with a wider mix of car manufacturers.

Of the 9.4 million cars in New York roughly a million are new each year. As vehicles age, the count of vehicles goes down, either because they are retired or resold outside of New York. The pattern below is critical for understanding how vehicle stock will change over time. For electric vehicle penetration to matter, the new car market share of electric vehicles must grow. Second, the penetration of electric vehicles won’t be instantaneous simply because only a relatively small share of individuals purchase and drive new vehicles. 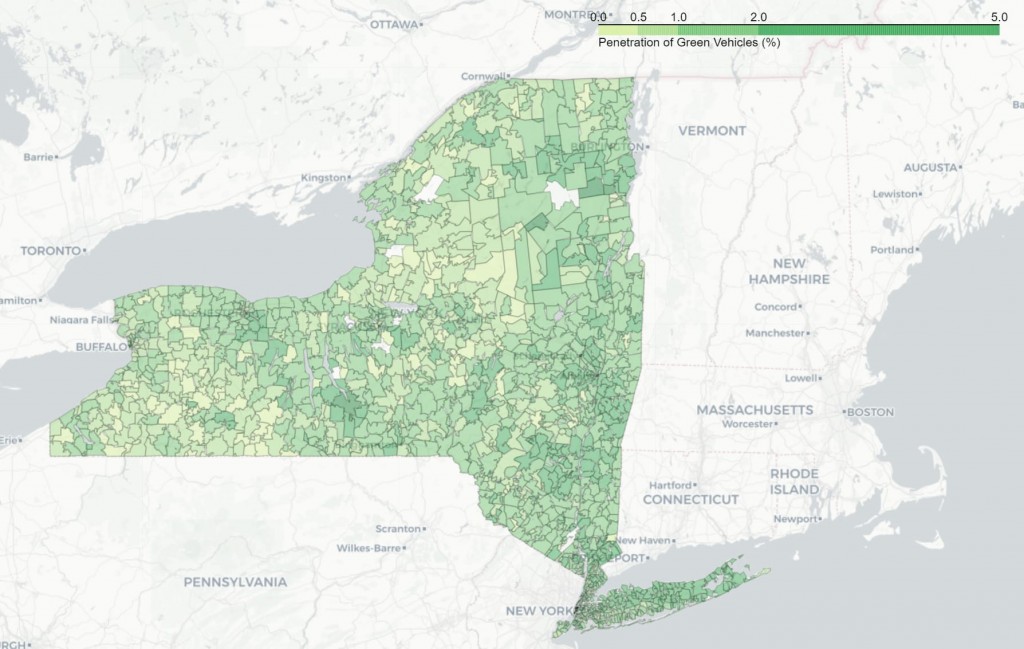 What Conclusions Can We Draw?

The analysis here is not about prognosticating the future of electric vehicles. There may be truly disruptive policies and technologies in the future. But what we know so far is the following:

Today, two of us toured the largest largest lithium ion battery energy storage facility in the U.S. at SDG&E’s Escondido Substation. There are 24 pods, with enough power for 20,000 homes for 4 hours – 30 MW and 120 MWh. For anyone into energy, it’s quite impressive and a big part of the future. Each pod has 800 batteries inside, for a total of 19,200 battery units. The batteries are same as those that go into the BMW i3 and are enough to build over 3,600 BMW i3’s. The most fascinating part was peering in the inside of the pods and the controls (you always see the pod photos, but almost never see the inside). The storage is mostly used to balance the power grid at 4 second intervals and has a ridiculous ramp rate capability of 200 MW/minute (that’s fast acceleration). A big thanks to Leslie Willoughby and Ted Reguly from SDG&E for setting it up. 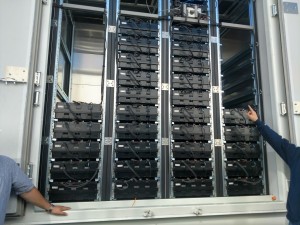